Meet The Team Who Meet Your Security Needs 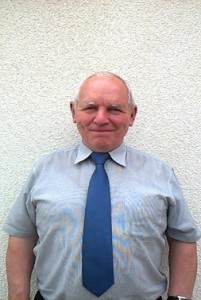 Having started working with Rely-A-Bell in 1966 Bernard gained a vast amount of experience during his 2 years’ service.

In 1968 Bernard joined Brocks Alarms as an Installations Engineer, due to his commitment Bernard was soon promoted to a Service Engineer within 6 weeks of his employment. All of the hard work that Bernard had put into the business paid off as he helped the company open up a new branch.

Becoming self-employed in January 1976 as BTB Alarms, Bernard was determined to succeed in the Security Industry, by 1981 BTB Alarms employed 8 members of staff. Autoguard Alarms was formed in 1983 and soon progressed to become NSCIA Approved in 1987.

Autoguard Alarms became a very successful company and registered as a Limited Company in 2009. Another member of staff was employed in 2000 as Autoguard Alarms Ltd had taken over Samuel Smith which increased the size of the business by 30%.

Both Wychaven Security and Droitwich Security were also taken over by Autoguard Alarms Ltd in 2005.

After building up the business for over 30 years Bernard is to take a back seat and is now able to do after employing an Operations Manager in order to take control of the day to day running of the business and also by knowing that Autoguard Alarms Ltd have reliable and professional members of staff on board, however Bernard will still be very much in the picture as hard habits are difficult to break!

Being a keen motorcyclist since the age of 16 years old Bernard then became a keen Moto-Crosser at the age of 20 and has continued to enjoy the sport for a further 49 years. During the 49 years Bernard has been a Chairman of a Moto-Cross Club and has instructed road racing at Mick Boddice Race School, has won the British Moto-Cross Four Stroke Championship and the Welsh Four Stoke Enduro Championship in 1986.

Being a dedicated father, Bernard attends Moto-Cross events with his sons who are also keen Moto-Cross riders.
Touring abroad on motorbikes has also been a very enjoyable past time for both Bernard, his family and friends.

Overseas friendships have been built up over the many years and Bernard will always strive to continue to travel all over Europe in order to maintain the friendship that has bought him so much enjoyment throughout his adulthood. 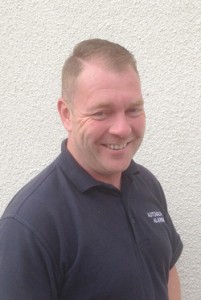 Dave joined Autoguard Alarms in April 1990 as an Installations Engineer.

Having worked in various departments within Autoguard Dave has exceptional knowledge of all security systems and how to install, maintain and service the equipment.

Dave was promoted to Engineer Manager in November 2009. He now successfully manages 11 engineers making sure that the engineers follow Autoguard's strict policies and working ethics.

Dave was then promoted to Engineering Director in November 2015.

Dave plays squash in his spare time as well as socialising with friends and spending time with his family. 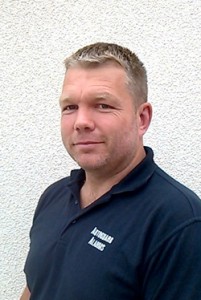 Phil joined Autoguard Alarms in October 2008 as an engineer. Phil is extremely knowledgeable in the security sector.

Currently Phil works in the service department but occasionally is asked to work alongside the installation department if a large job is required to be supervised. Phil has recently become a City & Guilds qualified Fire Extinguisher Installer he is also qualified to service and maintain all fire Extinguishers and Accessories.

Phil attended the Design 1 training course through the Fire Industry Association, he is now able to design a fire alarm system ready for installation for new or existing customers.

In June 2016 Phil was promoted to Service Director.

Phil plays squash on a weekly basis, takes part in various motocross events and spends time with family when he is not working. 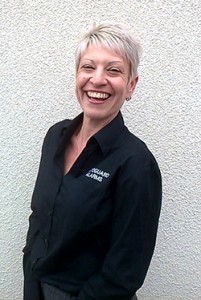 Jackie started her employment with Autoguard Alarms in April 1998 as a surveyor.

As part of the sales team Jackie maintains customer relations and provides the business with new revenue. With practical experience in sales Jackie is responsive to our customers’ needs and committed to developing their security requirements.

Jackie loves spending time with her family in her spare time and helping her daughter look after her horse and occasionally watches her daughter compete in various horse riding shows. Jackie is also a keen sports enthusiast.

Collette joined Autoguard Alarms in April 2008. During this time Collette has built up a very good relationship with various Police forces as Collette’s role is to ascertain if our customers have a URN (Unique Reference Number) in place for monitoring purposes, if no URN is in place then Collette applies for them from the individual force.

Collette also prepares written quotations upon request and makes sure that all relevant paperwork is completed accordingly.

Being a very dedicated employee Collette has no problem juggling her career whilst taking care of her daughter, Collette enjoys socialising with her friends in her spare time.

In January 2014 Jade was invited to work with the administration team due to the amount of work being generated.

Jade was employed through the apprentice scheme and is proving to be a very valued team member within the business.

Jade’s main focus in the business is to prepare invoices and statements for all of our customers and she works alongside Julia.

In Jade’s spare times she enjoys reading, watching movies and listening to music.

Being a Service Engineer since Jan 1993 Mark’s skills and knowledge are outstanding. Customers and colleagues praise Mark for his concise information and instruction.

Mark has recently become a City & Guilds qualified PAT Tester and is able to complete a full management system for all new and existing customers. Mark is a professional, dedicated member of the service team who always proves to be reliable and adaptable within his role.

Neil worked as a Trainee Installations Engineer for a security company since 1997 prior to Autoguard Alarms taking over this company in May 2000. Since being employed by Autoguard Neil has demonstrated a huge amount of expertise and was promoted to a Service Engineer.

Being a Service Engineer requires a certain kind of aptitude, competence and the correct attitude to be able to maintain an excellent relationship with our customers, having all of these attributes Autoguard Alarms is proud to have Neil on board.

Neil spends a lot of time with his family in his spare time but also enjoys watching Aston Villa play football.

Lee is one of Autoguard Alarms most experienced engineers. Having been employed by us since October 2000 Lee clearly demonstrates good working ethics and has developed a strong knowledge of the security industry having spent most of time since leaving school working in this field.

Lee is highly committed to customer’s requirements and no job is too much for him to take on board. Lee is a much respected member of the Autoguard Team.

When Lee is relaxing he enjoys spending time with his children, he also likes going to the cinema and socialising with his friends

In April 2006 Glyn joined Autoguard Alarms as an engineer. Having gained a vast amount of experience and extensive knowledge in the security industry.

Glyn’s main objective is to ascertain customer’s requirements and follow up with a detailed quotation. IP Networking is Glyn forte and because Glyn is so versatile he attends site to help the engineers from time to time to make sure the job is done to the customer’s satisfaction.

Glyn’s spends a lot of time with his wife in his spare time, he also loves to go fishing with other members of his family, playing football and enjoys socialising with friends.

Tom was employed by Autoguard Alarms in March 2014. Although Tom has not been with Autoguard very long he has had a wide range of experience installing security equipment all over the country.

Being a valued member of the team Tom has recently become a qualified PAT Tester and has the ability to create management systems for all of our customers.

In Tom’s spare time he enjoys riding his mountain bike, participating on long walks including walking/climbing up Snowden via Rhyd-ddu and spending time with his family.

Mark Hobbis joined Autoguard Alarms Limited in August 2015, having previously worked with other security companies Mark has brought a fresh approach to the business.

His hobbies outside of work include snooker, pool and darts and he also cuts a fine figure on the dance floor!

We are looking forward to furthering Mark’s experience within the industry and hope we shall have a long and happy working relationship.

Working for Autoguard Alarms on a part time basis whilst attending school since November 2011 Bernie started to learn the different aspects of the security industry. When leaving school Bernie decided to join us full time as a Trainee Engineer.

During this time Bernie has built up a considerable amount of knowledge and shows that he excellent interaction skills will customers and fellow colleagues.

Bernie is a qualified PAT Tester to C & G standard and can complete Management Systems for all our new and existing customers.

Bernie is a keen moto-x biker. He also enjoys socialising with friends and going away for weekends.

Robert left school in June 2014 and has been a valued member of Autoguard Alarms Ltd since this time.

Robert is a keen employee who is always eager to learn more and Autoguard is very excited to have Robert on our team as one of our Service Engineers.

In his spare time, Robert enjoys Moto-x, mountain biking and socialising with his friends.

Lewis Pearsall joined Autoguard Alarms Limited in February 2016 and has since proved to be an asset to the company.

During his time at Autoguard, Lewis has built on his knowledge within Security Services.

Lewis enjoys Moto-x and socialising with his friends in his spare time.